Hello Everybody. Yes, I am back and I am here to make this blog interesting again.

So I went back and read all the things I wrote during the beginning and I saw that those posts were much more like a good story. My last posts where much more just on the kills themself, not really about the experience I made on my way there. So here is my way of changing that again. But before I sit down for some storytime lets look at the ship I wanted to get a kill in and ended up getting much more.

The Merlin is a really big bastard. With a natural inertia modifier of 3,6 its one of the worst frigates you can pick. Its also one of the slowest frigates. So what is it actually good at?

Well: With a damage and a shield restist bonus it can deal lots of damage and take some beating. The only problem: You need to be able to apply that damage. So here is the fit I used:

The Nanofibre is compensating for some of the bad agility and speed stats of the ship. So what you want to do is get on top of your enemy and melt his face, while keeping your shields up with those two shield boosters. Kiting setups will kill you, so will most ships who fit a web, as they can easily disengage and get out of blaster range. Make sure to switch to null for that case. But enough about ships. Lets talk about people.

The Story of a Newbro

So from time to time I like to creat a new trial account and just stalk the newbie systems and channels. Sometimes I pick a person and bring my main character into the equation and see how I can help that person. One of those persons is regularly contacting me and joined factional warfare at some point. So he was asking if I was interested in a duel one day and I was. The Problem: He was in the Placid area and I was in Vale with several wardecs making it hard to move through highsec. So I used a neutral hauler to get 2 Merlins ready and started moving my pod.
This was the day I started to realize how common smartbombing podkillers are during EU prime. Anyway: with the third try I finally arrived at the destination and got my ships ready and we started nuking it out at the sun. He brought a Tristan, a ship that is one of the best T1 frigates these days. But thanks to a really strange fit from his side I won: 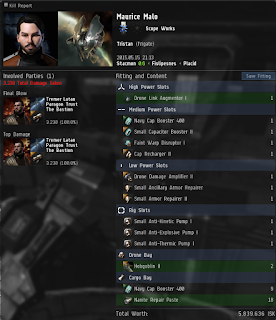 As you see, he tried to make that ship capstable. So I talked a bit with him again and he wanted a rematch as he had another ship ready. This time he brought an Incursus: 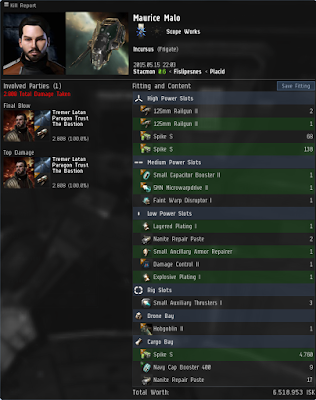 This time he went for kiting, but I was able to get a scram on him. He actually didnt knew, that the scram deactivates the MWD. Adorable new players. So I gave him some isk to replace those ships and gave him some advice on the way.

Just here for the fights

Thats my motto for these days. So I deployed to the Citadel with an alliance sig, but I decided to stay there after the inital task was over. After I brought over some ships it was time to explore the Caldari-Gallente warzone.

I have to feel a bit ashamed about that first kill with the Merlin, as I fell for the temptation of using an offgrid booster. I have one trained, primarily for fleets, but in this specific case it might have saved my life.
So I engaged a Slasher in a complex. Here comes the Problem I talked about earlier: The speed of the Merlin. The Slasher had an Afterburner, a nanofibre and tracking disruption. If it wasnt for the propmod speed links I would have never been able to get close enough to actually apply my dps onto him. But in this case I did and he died: 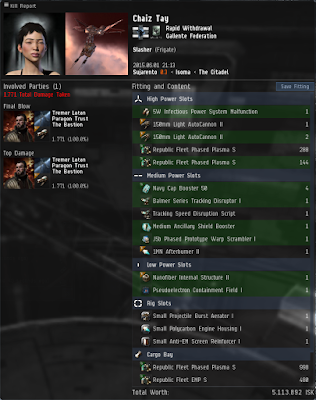 Often Boosts can tip the scale of an engagement or make active tanked ships incredible strong. I will keep on trying not to use a booster for my fights. I might reconcider it, once my ships start costing 1bil+.

Now lets get to the next fights. I killed two Tristans. The first one was nothing special: I warped in on him, went in close and killed him: 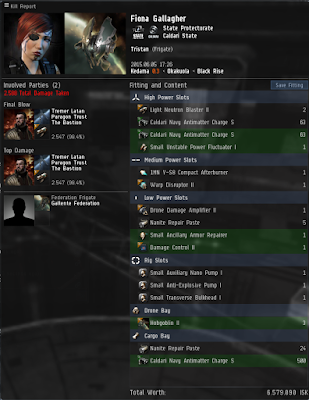 The next one is more interesting. I played with this guy on a station for a bit and realized, that he was MWD fitted. So I went into a Novice Complexe and preheated AB and Scram. Once he landet I tried to close range as fast as possible and get that scram on him. As this was successfull he died rather quickly: 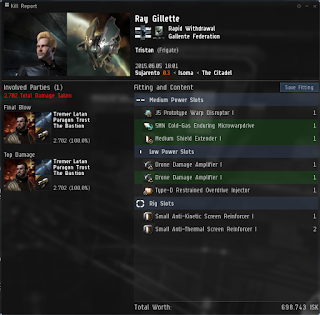 I have one more fight left for this ship and the last one was also the best. Like the last fight with the Tristan I was able to position myself in a complex. An Executioner warped in on me so once more I overheated the AB and the scram. The first seconds in a fight like this are imporant. If I get an inital scram the fight is easy. Otherwise I would need to try and slingshot the enemy into my scram range. But this time I was lucky and killed him: 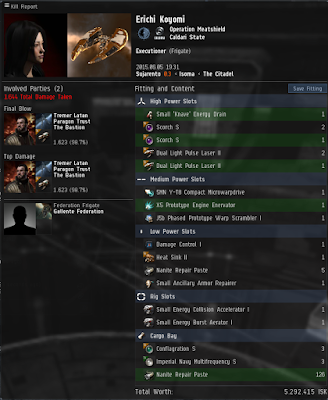 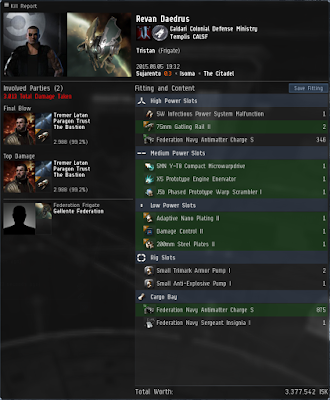 And here is my lossmail: 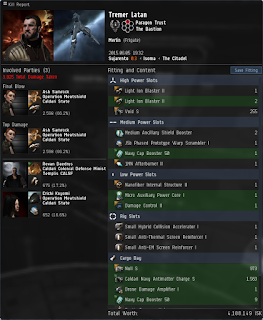 I lost more ships on my way to get these kill, but none of them are worth mentioning. And now here is the good part: I have recorded everyone of those fights, so here is a video for you to enjoy. Recording and watching your own module management makes you realize a lot of mistakes you make. I can only recommand it for everyone to try it.


And to finish this rather long post off, I will give you the ship chart. I updated it with the new T3 Destroyers:

I hope you enjoyed this post. See you next time.