Breacher: Wait ... what rig does he have?

I am getting really motivated lately to write these posts. Maybe its the exam periode comming closer and I want to distract myself from that. ^^

This time I bring you a ship, that I encountered the first time in a fight, where the other person killed 3 people in it, before going down himself. We were all noobcharacters and mostly people without experience, but I still saw it as a really strong ship from that day.

My fit is something, that really break one of EVEs biggest fitting rules: Dual Tank! 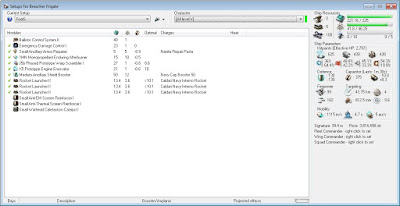 Why a dual tank you might ask? Well: I want to have scram web and propmod in this ship, but also dont want to waste the shieldtank bonus. But just one module for tanking is a bit low. What to do, once that one is one reload? Right: Tank with the lowslots. I also need to break up my usual fitting behaviour a bit and try new stuff. Now onwards to the lonely kill I had for this ship. But dont fear: Its a special killmail.

Its just one of those days in lowsec: You roam around, always spam your directional scan and hope for that thing to show up that you can actually engage. Suddenly: A punisher. That looks great, so lets go for it. Warping into that noobplex, looking and fireing. Shields are going down fast (as expected) and armor starts going away. Slow ... very very slow. But hey: the incoming damage is easily tankable, so lets not hope for bait. The fight is dragging on for a bit and the armor keeps going down. After getting close to reloading the rocket launcher things are getting a bit more critical, as my armor drops. But the ASB reloads quick enough so shield is going back up again. After shooting even longer that guy finally goes down and its time to check that killmail: 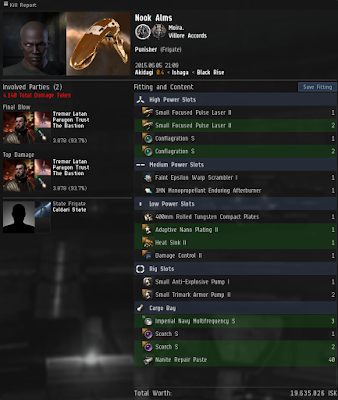 Who is insane enough to slap T2 rigs on a T1 frigate? I have no clue, but I am happy for the killmail, made with a ship just costing 1/3 of the ship I killed.

I lost that breacher later to a Rifter, but it was worth it. Sometime things need to be sacrificed to the welp gods! I will leave that out on the video and just give you the punisher kill. Quick and easy:

So where are we now with the ships I still have to do:

I see an opening for the blackbird there (as someone suggested). I will fill that one as soon as possible, once I have edited the remaining footage I have from other ships. Things are going pretty good these days, but I am still open for further ship suggestions, so I can move those up in my priority list.

I hope you enjoyed this quick post. See you next time.
Posted by Tremer Latan at 12:11 AM